The Gielows: Approaching life and giving as a team effort 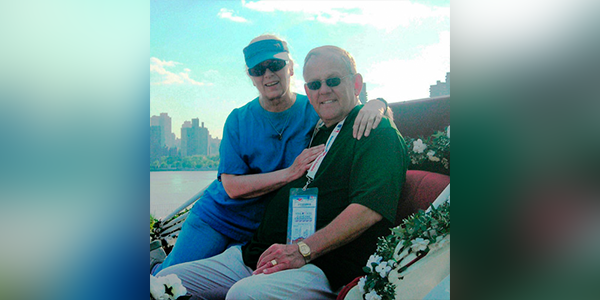 Early in their 46-year marriage, Bill and Georgiann Gielow realized they each had married a strong and independent person. Rather than designate a leader in their relationship, they chose to approach marriage and life in general as members of the same team. They've combined their skills and talents to enrich the lives of those around them, and they've learned a lot from one another along the way.

The Gielows view their relationship with Alverno College as a team effort as well. They have supported the college financially and through volunteering their time for decades.

"We took it one step at a time and got in deeper and deeper," Bill says. "I wasn't an Alverno grad, but I learned about it from Georgiann over the years. Alverno's got it right. It's remarkable what Alverno does for the women who come here."

Georgiann's introduction to Alverno came when she was still a student at Pius High School. There, she was influenced by Sr. Austin Doherty '54, Sr. Georgine Loacker '47 and Sr. Bernadin Deutsch '53, who later were instrumental in establishing Alverno's 8 Abilities and assessment model.

"Their attitude was that you could do it," she recalls. "It was taken for granted that you were going to college. Alverno prepared me to do everything: administration, teaching, clinical."

After graduating in 1964 with a Nursing degree and a strong liberal arts education through the school's Tri-Arts program, Georgiann earned a Master of Science in Nursing from the University of Cincinnati. She practiced as a child psychiatric nurse for 20 years, always combining psychiatric training with the arts. As a graduate of Alverno and member of the Alverno Nursing faculty for five years, Georgiann was part of the team who implemented the abilities and assessment model.

Bill began working nearly full-time in high school to help support his mother and brother. His senior year, a friend told him about a program with the Milwaukee Police Department. He worked his way up the ranks and took college courses during a time when it was unheard of for officers to do so. When he retired after 41 years, Bill held the third-highest ranking position on the Department.

The Gielows understand the power of education - and of giving back.

Sr. Bernadin, who has remained a family friend, describes them as model servant leaders. In addition to careers of service, they are active in their church and community. Bill remains deeply involved in the Stars and Stripes Honor Flight, while Georgiann teaches piano to persons of all ages. Once again, many of their service activities are a team effort. For example, Georgiann is a weaver, so at the request of the Alice Bertschy Kadish Foundation, the Gielows teamed up to develop the Alice Bertschy Kadish Memorial Weaving Center.

Their commitment to Alverno has grown through the years. Both have served as Alverno assessors, and Bill recently joined the School of Business Advisory Board.

They were inspired by attending Celebration of Giving, an annual event to honor Alverno's scholarship donors, to establish an annual scholarship, which was first awarded in 2006. Later, they set up an estate gift and then an endowed scholarship. The combination of planned and annual giving allows them to help ensure Alverno's future while also seeing how their gifts are benefiting students today.

"Both of us wanted to do something with Alverno," Bill says. "We had set up planned giving, but I also wanted to see some results now. With the combination of annual and endowed scholarship we could see more."

Interactions with Alverno students continues to motivate them, and meeting scholarship recipients at Celebration of Giving is one of the highlights of their year. They often refer to the recipients of their scholarship as "our students."

"The students are not only friendly but confident. They call us to say thank you. They remember us," Georgiann says.

Kaye Leszczynski '11,'14, Alverno's director of development, says every time the Gielows visit campus, which is often, they seek out students.

"They really stay involved in the Alverno community," Leszczynski says.

It's no surprise that in 2016, the Gielows became the first couple to receive Alverno's prestigious Exemplar Award, which is usually given to an alumna who has given consistent support and leadership in helping Alverno to grow and improve.

Through their annual and endowed scholarships, the Gielows have helped 13 women earn their Alverno degrees. Their planned gift will be added to their endowed scholarship to ensure the funds last in perpetuity. With each of their gifts, the focus has been on improving lives and improving the Milwaukee community.

"I would describe the Gielows as super team. They've always approached Alverno as a couple," Leszczynski says. "Their main goal when they set up their scholarship was how could they make Milwaukee better, and they felt the best way to do so was through helping Alverno women."