Alum Gives Opportunity for Others to Live Alverno Strong 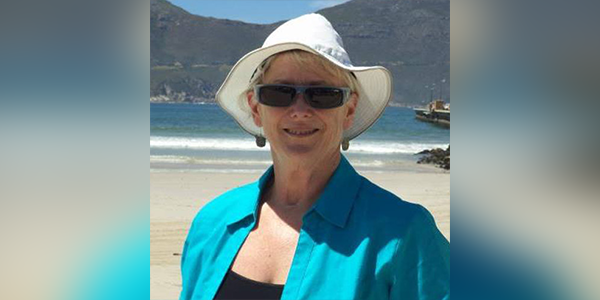 Growing up in a small Missouri town, Diane Nunnelee '69 never envisioned life would lead her from speech and theater to ministry to retirement in Cape Town, South Africa.

"I've had a great life that's a bit different from others," she says.

Nunnelee, now 70 years old, says Alverno and its mission helped shape her life. Troubled by self-esteem issues, she came to Alverno at the age of 18 believing a women's college would offer a safe place to figure out who she was. She credits her alma mater as the place that set her on a lifelong path of discovery and living authentically.

"We were taught the value of women as participants in life and society," she says. "We knew the importance of asking questions and working through what we believed."

Part of her own self-discovery included an increased passion for civil rights - she clearly remembers marching with James Groppi and the NAACP Youth Council to fight for fair housing - and a life-altering redefinition of her faith. Raised Catholic, Nunnelee became an agnostic in her 20s and then had a spiritual awakening that prompted her to enter a Methodist seminary at the age of 30.

She served as a pastor for nearly 30 years, beginning with five churches in rural Missouri. She then became a campus minister where she took her first team to Haiti with Habitat for Humanity. That led to her appointment, in 1985, as the director of volunteer services for Habitat for Humanity, assisting in training international volunteers.

"Early in my ministry, as the horror of apartheid became more known, I felt a pull toward South Africa," says Nunnelee, who at one point in her career as a pastor led an international team of doctors and clergy in response to the Rwandan genocide.

After nearly four years with Habitat, she returned to Missouri upon her brother's unexpected death in 1988, pastoring a local church and met and married her husband, Don Schomacker, a Presbyterian minister. In 1996 Nunnelee was asked to take on a two-year assignment in two townships outside Cape Town with the Methodist Church of South Africa. Don agreed, and she became part of an indigenous clergy team, preaching in 13 churches.

When the assignment concluded, Nunnelee returned to local church ministry. Together, the couple continued taking work teams to Cape Town every other year until 2008, when Schomacker developed the rare cancer that would take his life two years later. Nunnelee took early retirement in 2009 to care for him but remained involved in her community and beyond, advocating for affordable care at the national level and advocating for LGBTQ acceptance in the Methodist Church.

A year after her husband's death, Nunnelee returned to South Africa to continue a life of service in new ways. The first few years, she helped raise funds for an organization that was training preschool teachers and developing early childhood programs. These days she tutors eight elementary school children in reading, volunteers in the box office of the local community theater.

"I came here because I wanted to get up every morning and feel like I'm making a difference," Nunnelee says. "One of the things I discovered in my ministry is that all of us have the opportunity to make a difference."

Nunnelee also wants to make a difference to the place that changed her life: Alverno. She makes annual gifts and, when she set up her will, she provided for Alverno through her trust. She wants her planned gift to provide other women with the opportunity to discover who they are and forge their own paths.

"Alverno taught me how to risk who I was for who I could become," she says. "If I can help another woman get set on her path, it's an honor and a privilege."