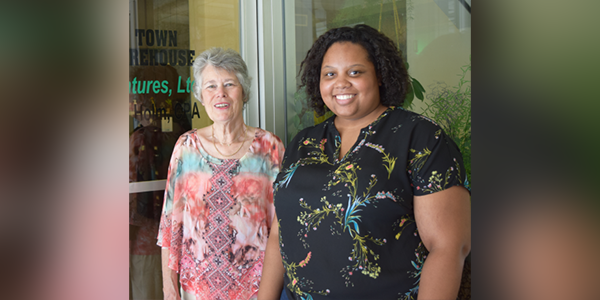 Late last year, Glenda Holm '69 found herself needing to hire a new employee quickly. The CPA and owner of GEM Ventures Ltd., which provides tax return preparation, was heading into tax season and down two part-time employees. She decided her business was in a good place to make another full-time hire.

Holm turned to her network, which includes staff at Alverno. Soon Aaliyah Brown's resume landed on Holm's desk. The management accounting major had graduated in December 2018.

Holm says the two women have dissimilar backgrounds, but Holm, whose mother never let her use the words "I can't," appreciates Brown's drive and her stick-to-itiveness when it comes to solving the puzzles of their industry.

"She came in at the beginning of February when we were up to our eyeballs in taxes. We just had to say, 'here's a project, go figure it out,'" Holm says. "That's where I think some of the Alverno learnings came in."

Brown says her role at GEM Ventures is exactly the type job she hoped to find once she graduated - and what she learned at Alverno helped her land the job and excel.

"Alverno prepared me to dive right into this role, and I know my confidence in my abilities helped me earn the position," Brown says. "Working for a smaller company allows me the opportunity to work alongside the owner of the business. I learn a lot each and every day working for Glenda, and I know my opinion is valued."

Holm is pleased to be in a position where she can help mentor a young accountant, just as she was mentored. Her career began at the FDIC in Appleton, where she became the first female bank examiner in Wisconsin. A few jobs later, after returning to Milwaukee, she sat for the CPA and passed the exam and licensed. Then, and at the encouragement of her boss, she got her commercial real estate license - she eventually bought his downtown storage business and added property management to her repertoire.

"The supervisors I had encouraged me and moved me toward an upward path," she says. "Of course, being Alverno Strong I never took a backseat to anyone. Alverno builds strong women."

Because of her positive Alverno experience, when it came time to form a will and trust for her husband and herself, Alverno quickly became one of the trust beneficiaries. The couple, who will celebrate 50 years of marriage in 2020, set up their trust through the Greater Milwaukee Foundation to provide support for about a dozen charities they care about. Alverno and her husband's alma mater are at the top of the list.

The importance of their action has been confirmed already. Holm says one of her client's daughters transferred to Alverno's nursing program and has received beneficial scholarships. After Holm met Brown, she learned that the recent graduate wouldn't have been able to complete her studies without scholarships and financial support from Alverno donors.

Having heard the stories of these two women, Holm knows that setting up a will and trust that benefit Alverno will allow her to help more women like them earn their Alverno degrees.

"You can control the destiny. You know where your money is going," Holm says. "And because it's Alverno, you know the reputation of who's getting it."

For more information about ways in which to include Alverno in your estate plans, visit Gift Options.