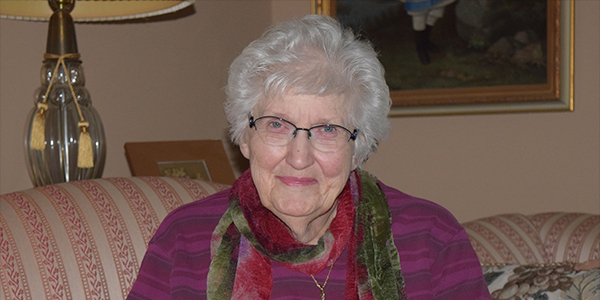 Looking back on her life, Joan Wilde '59 says she probably should have been an architect or pursued a career in math. She loved to build and design. She describes how her father, a self-taught builder and business owner, taught her how to rewire a lamp when she was just a child.

Although Wilde wasn't interested in her high school business courses, her father suggested she become a secretary. Instead she went into the School Sisters of St. Francis convent to continue voice lessons she'd begun after graduating from Mercy High School in 1948.

She enrolled as a music major at Alverno on Layton Boulevard. When the college opened its new campus on 39th street, Wilde moved there and began her lifelong journey of learning and self-discovery.

After leaving the Order in 1967, Wilde taught at Milwaukee Area Technical College. Just before completing a master's degree at the University of Wisconsin-Madison, she received a prestigious National Defense Education Act grant to complete a master's degree in counseling at California State University, Los Angeles.

Degree in hand, Wilde left California for a job as a counselor at Catonsville Community College in Maryland with a solid education and $10,000 in loan debt. She still remembers arriving at her unfurnished apartment and asking the neighbor downstairs if she could borrow a chair to sleep in. The neighbor kindly loaned her a reclining lawn chair.

Undeterred by her financial situation, Wilde jumped right into her new job, developing the career area.

"When I got there, the only thing they had on careers was one file drawer with material about a few careers," Wilde says.

She also applied for a state grant to start a career center. Later, she became involved with Project Second Start, a program designed to support women who had never attended college. In addition to helping all students with many different concerns, Wilde spent her career helping other women to develop theirs.

That commitment didn't stop after retirement - instead she began supporting Alverno.

"I'm the person I am because of Alverno. There's no other way to look at it," Wilde says.

Making a gift through an IRA charitable rollover has been particularly helpful. It allows her to use the required minimum distribution she must take out of her IRA to make a significant annual gift for a student scholarship and provides her a tax break.

In fact, using her IRA charitable rollover gifts, Wilde is establishing the Joan Wilde Annual Scholarship, which will be given to an incoming freshman with high need and will continue each year until she graduates. In addition, Wilde will make a planned gift through her will that will endow the scholarship fund, ensuring her scholarship will continue on forever in perpetuity.

With her gifts, Wilde isn't just providing financial support - she wants to inspire others.

Thank you Joan for supporting your Alverno sisters and ensuring your scholarship will continue to impact Alverno students for decades to come. Learn more about IRA charitable rollovers.